Posted on August 9, 2017 by gallerynight

Gallery Night Providence is very much looking forward to having Pop Icon host as one of our “Celebrity Guides”  on August 17, 2017.

Pop Icon has worked in the arts for over 24 years. Starting with winning multiple scholastic awards for both Sculpture & painting, in the mid 90’s he decided to attend The Art Institute of Boston at Lesley College and classes at Rhode Island School of Design, he devoted his time to running an art group known as Pop Icon & The Cocktail Club (changed to Pop Icon & The House of Icon after joining AA) and dedicated a lot of his time in the fight for DIY gallery shows, events, free speech and equality.

Pop’s primary focus is on post modern art that draws from the banal and kitschy elements of Pop Art with a major emphasis on color and fun. 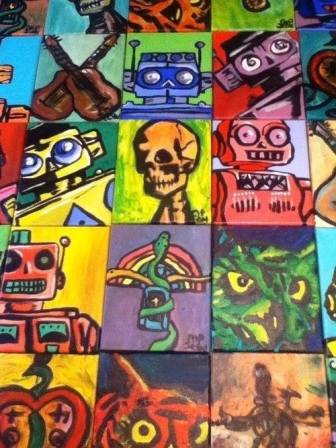 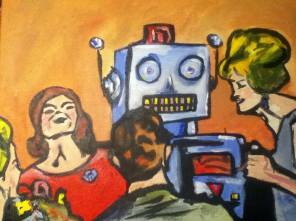 Pop has shown in solo & group shows at The Warwick Art Museum, The Providence Art Club, Hayden Art Gallery, The Main Gallery at The Art Institute of Boston, Gallery Z, Gallery Insane, The Brooklyn Coffee Tea House, Colo Colo Gallery, Bolt Gun Gallery, The Douglas Gallery and Gallery X.  His robots first appeared and sold out to raise money for both the Trudeau Center & Sojourner House at the Rock Girls Robots event at The Roots Cultural Center in Providence, RI & at big house parties thrown at his house. Pop now is having pop up gallery shows in New England called The House Of Icon.