Sprout is pleased to highlight these 6 local artists for our August show titled Natural Wonders. All the artwork in the show somehow represents natural wonders all around us. Gallery Night Providence Celebration on August 17th, snack included.

Visit us at 166 Valley Street on the Rising Sun Mills Campus in building 6M. You can find us online at www.sproutri.com. We are open every day from 9-5 and on the 3rd Thursday of every month from 5-9pm.

is an interdisciplinary artist based in Providence, Rhode Island. She graduated from the University of Connecticut in Storrs with a Bachelor of Fine Arts in painting and printmaking in 2008. Directly after, she joined the graduate printmaking program at the Louisiana State University in Baton Rouge, earning her Masters of Fine Arts degree in 2011. Her studio processes combine printmaking, hand papermaking, sculpture, and book-arts techniques, creating artwork that address contemporary landscapes. She gathers sketches and materials from each site to create innovative installations and works of paper. Babcock exhibits nationally and internationally, and has taught courses in all forms of papermaking, printmaking, drawing, and two-dimensional design. Additionally, she is the founder of Paperslurry.com, an active blog dedicated to promoting the art and craft of hand papermaking. She serves on the Hand Papermaking Magazine Board of Directors. Sprout is proud to host one of her new enclosed instillations. Come inside!

Dan Borden’s art is experimental – he photographs the familiar visual backdrop of life, striving to capture images of the commonplace in new ways, in an effort to bring to light the beauty of the world that is hidden in plain sight. Many of his photographs are taken with older Polaroid cameras loaded with Fuji 100c “instant” analog print film. These images are composed in the camera using multiple exposure and other hand-held techniques. More recently, he photographs using my iPhone 6s Plus’ camera. Dan is a purist. The images are what he sees 60 seconds after the instant print is peeled from the developer layer, and even more immediately when shooting with his iPhone. Dan’s analog instant prints are scanned for digital reproduction and printing, but never cropped or “photoshopped” to manipulate their composition. His iPhone’s digital images, like the analog photos, are not digitally edited, filtered, or enhanced after the shot is taken. Exploring the interplay and tension between artist control and happenstance, the resulting photographs surprise with a visual power to bring new meanings to what we see every day.

Joanne DeLomba is a product of the Baby-Boomer generation. As a child she enjoyed the Pop Culture of her generation and as an adult, she has become an avid collector of those magical days-gone-by. In Art school, she recognized all her favorite themes in the visual vocabulary of the Pop Art movement and jumped head-first into that world. Joanne enjoys the graphicness of everyday objects, and draws her artistic influences from vintage advertising art, antique tintype photography, Pop Art and contemporary popular culture. For over 25 years Joanne operated a successful ceramics studio, creating hand painted Art-Pottery while raising her family, doing laundry and feeding the dog! In her down-time, she taught herself photography and began manipulating images to create whimsical scenarios with a timeless quality. She first introduced her Story Prints as a collection of Giclee prints. She begins her process by photographing textures, people, objects and whatever she needs to build the image. She also draws from her extensive collection of 18th century tin type photographs which she has gathered over the past 30 years. She prints on Metallic Pearlesence Archival paper to give the final product that antique, tintype feel. The medium perfectly mirrors the emotional tone of the image!

Cathren Housley attended Rhode Island School of Design, where she first majored in sculpture but eventually earned a certificate degree in children’s book illustration. Housley is listed on the Rhode Island State Council on the Arts’ education roster, and she is certified by the council to create and run educational art programs in the public schools. In addition to illustrating, Cathren designed inspirational jewelry and gift items for Cathedral Art Metal in Providence, Rhode Island. Her best-selling line included the Blessing Pin, which prompted fan mail from all over the country. Her accolades include a silver medal from the Mom’s Choice Awards and two Rhode Island Public, Education, and Government \awards. Cathren has also found success in other career fields. She produced her own cable show, which won three educational and media awards, performed as a folk singer, and taught martial arts in a dojo. Cathren lives in East Providence, Rhode Island.

Sarah Kwiatkowski is an eighteen year old artist who began drawing frequently her freshman year of high school, and quickly became enthralled with art. Throughout her high school career she was awarded many scholastics awards. In 2014 she was introduced to colored pencil as a fine art material. She enjoys creating realistic drawings with a slight twist, often creating artwork with a limited color pallet or exploring and emphasizing the color’s found in nature. This upcoming fall, she will be attending New Hampshire Institute of Art. She plans on studying illustration and completing a five year program to become a high school art teacher to share her passion towards the arts.

Hollie Lollie is a RI native who makes sculptures, painting and mosaics. As a child she spent weekends with her grandfather in Potowomut, RI taking care of horses and landscaping.  Her grandfather taught her at a very young age that nothing is truly trash. From old horseshoes, beach glass, seashells, grapevine clippings and branches she watched her grandparents make jewelry and home decor. Growing up so close to Narragansett Bay, Hollie learned the value of nature and the importance of preserving it. When attending Pilgrim High School in Warwick, Hollie’s art teacher Ms. Xavier opened her eyes to the many artistic opportunities that life offers. She taught Hollie never to give up on an idea and would often remove all the erasers from her pencils. This showed Hollie that there are no mistakes in art, and that when an idea sparks, you need to keep it burning. It may not turn out as envisioned, but it will be something amazing in the end. Hollie began painting, creating mosaics and jewelry out of beach glass as well as making paper and plastic sculptures at the age of 14. Hollie’s art work focuses on our oceans and marine life. The floating landfill in the Pacific as well as the marine life dying from human trash has always disgusted Hollie, so she incorporates the garbage she finds on the beach into works of art.  Hollie taught her three children to love and respect nature as well as art.  She feels strongly that the world would be a cleaner greener world if we just banned plastics worldwide. Hollie is happy to be showing again at Sprout. 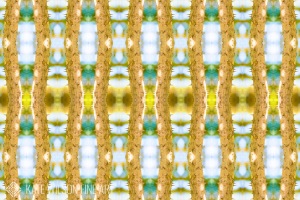 Kate Wilson sees majesty in the simple all around, and through her eye, offers a visual adventure that challenges her audience to play along. Starting as simple photographs, her work becomes illusory through her creative process. As an added layer of intrigue, the viewer may discover a positive message hidden within, twisting reality on another level. Magnifying glasses will be on hand to assist viewers in their hunt for these treasures. Kate Wilson’s art is influenced by her love of nature and fine art, her years spent as an educator, her work as a graphic designer, and her happy outlook on life. She lives and creates in Cranston, Rhode Island. Look for her feature in Providence Monthly Magazine this month!

For more information, or to submit work for consideration, please email gallerymanager@sproutri.com

1 Response to Natural Wonders At Sprout