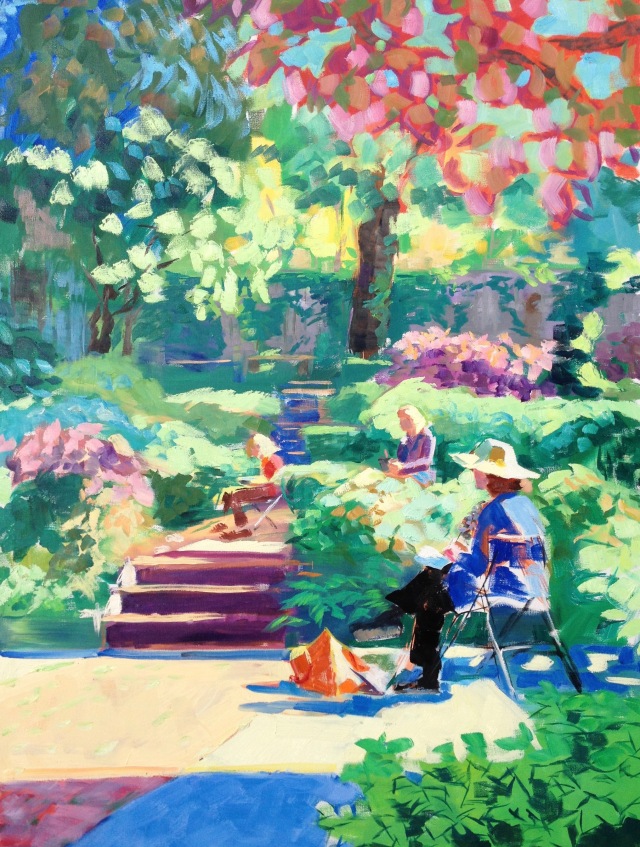 In a small sun-filled bungalow just north of Providence College, painter Margaret Own and her husband Michael, also a painter, live with their eleven-year old son. It’s a cheerful family home filled with strong bright colors, artwork of all shapes and sizes, and many, many legos.

Owen herself is a lot like her house, positive and unassuming, quiet and cheerful – a steady presence that drinks in the sun and happily lives her life collecting experiences along the way.  She grew up in a small college town in Virginia called Farmville.  “I wasn’t a kid who drew a lot,” says Owen. “I did a little bit of painting and a lot of wandering around and daydreaming.”

Her family moved to McLean, Virginia when she was eight and as she grew older, she began to visit museums and take in paintings by Mary Cassatt, Paul Cezanne, Edgar Degas and Henri Matisse.  She visited the Phillips Collection in Washington, DC.  “That’s where I met Bonnard and Rothko,” Owen explains, speaking of the French painter and colorist Pierre Bonnard and American painter Mark Rothko.

She attended the University of Georgia for her undergraduate degree and then went on to graduate school at the NY Academy of Art, which offers a traditional program in painting. “I loved getting to paint day after day from the figure,” Owen says, “and I got better at it.”  She met Michael at the academy.  They married, had their son and moved back to Rhode Island where Michael grew up.

Today she paints whenever she gets a chance, a few hours at night when her son goes to bed and in the morning when he is at school.  Her studio is down one flight of stairs in the large, open and surprisingly sunny basement.  Hundreds of colorful paintings, watercolors and drawings line the walls. Large complex florals marry intricate patterns with bold vividly colored blossoms.  Fluid atmospheric landscapes keep company with light-filled still lifes.

Owen keeps a blog where she posts not only her thoughts, but every painting, watercolor or drawing she is working on, sometimes a different painting each day. Her paintings could be small 6’x6” sketches or a large 30’x36” painting, but they keep her going moving in the right direction.  “It’s been very helpful,” Owen says about the blog, permanentmagenta.com. “I’ve made so many more paintings because of it.”

Her good friend Canadian painter Elizabeth Hutchinson has also been an important influence in Owen’s creative endeavors.  In 2012 they began traveling abroad together, first to Morocco to teach a workshop and paint.  Later they visited Paris, France to paint and see paintings.  All told, they made four trips to Morocco and two to France, a major achievement for anyone, never mind a mom juggling family with teaching and studio time.

“At that time,” Owen says, “we were both seeking to push our art making outside the walls of the studio, to incorporate it into busy days when it seemed as though there was not time to paint.”  The spontaneity of watercolor sketching outdoors inside nature drew them and they decided to create a blog, moveable paintbox, to share this small daily practice with each other, their students and other artists.

Owen constantly quotes painters and writers on making art.  Small pieces of paper with handwritten passages are taped to the walls and windows of her studio.  She still hears the voice of Wade Schuman, who she worked with at the Academy saying, “That thing you want to paint, but think you can’t? Paint that.”   Or, quoting Hutchinson, “Leave room for the viewer,”

The landscapes she is exhibiting at the BankRI Galleries strive to do just that.  Owen’s painting style is characterized by a complex syncopation of color and marks. Whether Owen is painting the markets of Marrakesh, or the streets of Paris or the pocket gardens in Providence, she brings to her work a vital exuberance that both excites and satisfies. In these paintings, she “looks for a feeling of openness, of light and color … and to create a certain feeling of aliveness and the abundant insistent, persistence of nature.”
Amidst the color and the movement, she has added a new element – dappled light filtering in to let the canvas breathe.  You can almost hear the sigh. 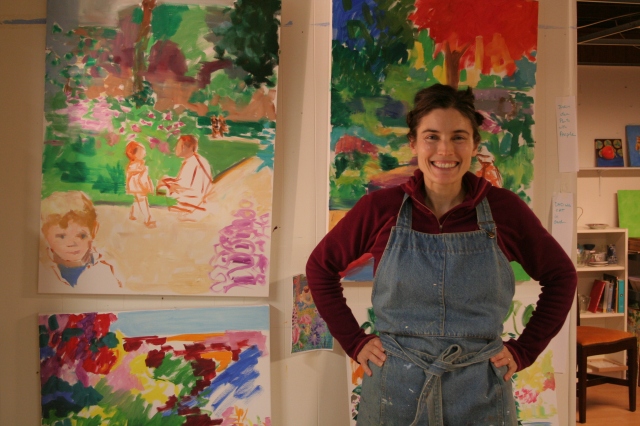 Margaret Owen in her studio.