BankRI Turks Head Gallery: “Wondering About Flow: Paintings by Karen Rand Anderson,” November 5 through December 2, 2015. There will be a Gallery Night reception on November 19 from 5 to 8:30 pm with live music by guitarist Mark Armstrong and light refreshments.  Exhibit hours are Monday through Wednesday 8:30 a.m. to 4 p.m., and Thursday and Friday 8:30 a.m. to 5 p.m.  For more information, contact www.bankri.com or call 401-574-1330. 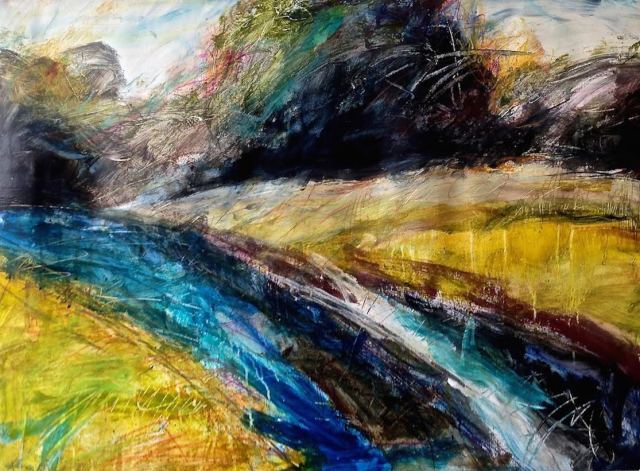 Karen Rand Anderson exhibits paintings on paper at the BankRi Turks Head Gallery November 5 through December 2, 2015. There will be a Gallery Night reception on Thursday November 19 from 5 to 8:30 pm. This is the last Gallery Night of the 2015 season.

It’s hard to miss it.  Almost in the center of the studio, surrounded by drawings, paintings and sculpture, stands a six-foot tall anti-gravity inversion table.   The artist, Karen Rand Anderson, straps herself in and demonstrates.  With a gentle rocking motion, she is upside down, feet pointed to the ceiling, head to the floor.  “This is my upside down machine,” Anderson says.  “It is a really good way to just stop.”

Growing up outside Schenectady in upstate New York, the young Anderson spent much of her time outdoors playing in the woods and fields in the summer and skiing in the winter.   As it is with many young people, Anderson was unhappy in high school.  Unlike her peers, she worked hard and earned enough credits to graduate early. The multi-talented Anderson took off for Boston to attend the School of Contemporary Music.  There she studied music theory, piano, guitar and vocal training.  Six months later, she traveled south to Providence to attend the Rhode Island School of Design, graduating in 1977 with a BFA in ceramics.

After graduation, Anderson moved to Connecticut and pursued careers in both music and art.   Her life took an unexpected turn when she met and married a writer/photographer and had two children.  For ten years, she abandoned both art and music – her creative life was on hiatus while she raised her daughters.

In 1995 when her youngest daughter turned four, Anderson enrolled in the Lyme Academy College of Fine Arts.  “ There had been a huge dark hole in my life without art,” Anderson says.   She took classes at RISD’s Continuing Education program and later was accepted into the low-residency MFA program at the Vermont Studio Center in conjunction with Johnson State University.  She graduated in 2010.

Meanwhile her marriage had failed and Anderson wanted to restart her life.  After completing her master’s thesis, she moved back to Providence.  “It was like coming home,” Anderson says.  “I have so many wonderful memories of Providence.  I felt like I returned anew!”

At the Vermont Studio Center, Anderson made sculptural works that reflected the deep gloom she was in.  She used burnt paper, found objects, monochromatic color schemes, barbed wire and mementoes of her married life to help her sort through the pain.  When she arrived in Providence, she put that work behind her and began to focus on her painting.

“I needed a sense of beauty and healing,” Anderson says.  She reconnected with artist and Krause Gallery director Kristin Street.  Street showed interest in her work and encouraged her to apply to the gallery for an exhibit, but Street wanted to exhibit Anderson’s abstracted landscapes, not her sculpture from the Vermont Studio Center.  Anderson went to work and put together a group of paintings she was confident to exhibit.

Her paintings celebrate the natural world that was so much a part of her childhood.  Strong colors, abstracted viewpoints and a poetic approach characterize the paintings.  Nothing is spelled out for the viewer; rather the paintings are suggestions of an idea of place rather than a specific location or time.

It is scary to recreate yourself midlife, and it takes a determined and strong individual to do so.  “It’s easy to slip back into a place that has no sparkle or brilliance,” Anderson says. “I needed to go forward and moving to Providence has given me that opportunity.”

Anderson’s work has been shown regionally and nationally, and can be viewed at www.karenrandanderson.com.

1 Response to Karen Rand Anderson at The BankRI Gallery