September At The BankRI Gallery

Posted on September 14, 2015 by gallerynight

The BankRI Galleries present:
At the BankRI Turks Head Gallery: “Invisible Sadness: Paintings, Collages and Cartoon Art by Tom Marino, September 3 through September 30, 2015, 2015. There will be a Gallery Night reception on September 17 from 5 to 8:30 pm with live music by guitarist Mark Armstrong and light refreshments.  Exhibit hours are Monday through Wednesday 8:30 a.m. to 4 p.m., and Thursday and Friday 8:30 a.m. to 5 p.m. 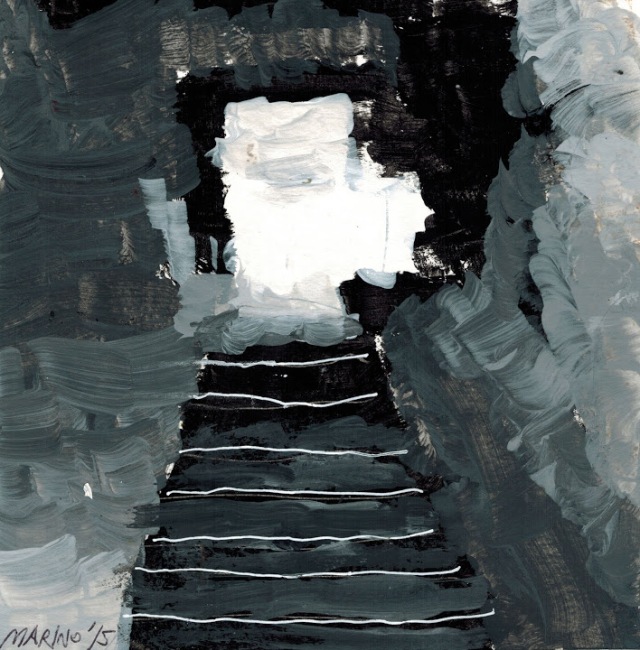 For most people, the war in Vietnam is a distant memory of the 60s or a dusty chapter in an American history book.  For visual artist Tom Marino, the Vietnam War was one of the defining moments of his life.

Fresh out of high school with only a vague idea of what he wanted to do with his life, Marino went to Vietnam as a Navy combat medic for a marine platoon.  It was a rude awakening for the young man.  “The average age was 19,” Marino says. “I was 18.  I got out of high school and ended up in a scary, horrible place.”

Six months later, he was shot and wounded in the knee. Air-lifted out of the jungle, he spent a year in St Albans Hospital in New York.  He endured 15 surgeries before doctors finally replaced his knee. Some 50 years later, he still suffers on and off from Post Traumatic Stress Disorder.  “Although, it really is better,” Marino says.  “I can watch fireworks now.”

Marino had taken art classes before he was drafted.  But it was a good friend and war buddy Glen Dressler who became his creative inspiration.  The two were both wounded and shipped out together.  Dressler, who was also an aspiring artist, lost an arm, the arm he used to paint and draw. Determined to continue painting, he taught himself to work with his remaining good arm.  Marino watched firsthand as his friend pieced his life back together and Marino wanted to do the same.

He enrolled in Ulster Community College in upstate New York.  He worked in Manhattan as a commercial photographer. Later, he moved to Rhode Island to be near his sister and attended the University of Rhode Island, graduating with a BFA in Studio Arts.  “I didn’t know what I wanted to do, so I took every class they had,” Marino says.  “To this day, I can’t say whether I am an animator, a painter, a comic artist or a collage artist.  It just changes everyday.”

Marino now lives in New Bedford with his wife, an artist and former antique dealer.  In April, Marino read a book that totally changed the way he made art.  “Daily Painting” by Carole Marine advocates painting a new small painting every day.

“It totally changed the way I’m working,” Marino says.  “Now I can walk in my studio and start something new every day.”  Recently Marino exhibited experimental animation at Dartmouth College in Hanover, NY.  He is working on a graphic novel entitled “Things I Did Once” and he is experimenting with abstract comics that have no sequential story line.

The paintings, cartoons and collages exhibited at the BankRI Galleries all measure 6 inches by 6 inches.  Although small, they pack an emotional punch with an honest abstracted realism.  The self-portraits are magnetic.  In one, Marino lies flat, his head dropped behind him, a red cross vivid on his pale chest.  They are an unflinching look at a man who manages to pull himself together everyday in order to rediscover the joy of making art.

“When I came home [from Vietnam], I wasn’t the same person,” Marino says.  “Art is definitely my therapy.  It’s cathartic.  I’m driven to keep making art.  It’s part of you.  It just comes out.  Your fingerprint is on everything.”

1 Response to September At The BankRI Gallery