We here at Gallery Night Providence would like to wish all of our followers and supporters happiness and good fortune in the Lunar new Year.  With this being the year of the horse, I’d like to share these images from the Bert Gallery. 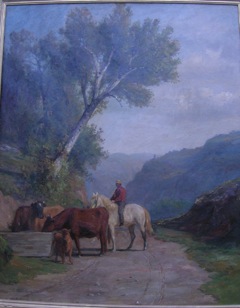 Thomas Robinson(1834 – 1888) contributed to the art culture of Rhode Island both as an artist and as a conduit for French painters to enter the art market in the United States.  This dual role makes Robinson one of the more interesting artists in the show.
Born in Pictou, Nova Scotia, Robinson came to Providence at a young age.  His art training was rather informal, consisting of a few instructions from a private teacher, and some lessons in calico printing at Phillip Allen’s Print Works.  At the age of nineteen he decided to paint for a living and sought further art training in Europe.  There he sharpened his skills by copying the great masters in London and Paris museums.  It was in Paris that Robinson met August Bonheur and received some individual instruction.  After three years of earnest study, Robinson made his way back to Providence and became one of a triumvirate of kindred spirits (M. Waterman and J. Lewin) at a Weybosset Street studio.  There is some evidence that the artist then trained at the Cummings Art School in New York sometime in the 1850’s; however the exact date remains unknown.
Robinson excelled in his painting of animals and landscapes using the “Courbet method of lining with a brush each object of interest – making a sort of wall to keep color within bounds.” (Whitaker)  Throughout the years 1860 – 1889  Robinson continued to make trips to Europe and befriended the eminent Boston artist William Morris Hunt.  As Robinson’s work developed, it became evident that “he imparted to his canvases a powerful individuality emphatically his own.” (Whitaker)
Robinson’s knowledge of French painters sired a strong relationship between the artist and S. Morton Vose, of Vose Gallery.  Mr. Vose was introduced to the French Barbizon School by Robinson.  By the use of Robinson’s vision of new trends in art, Vose Gallery became one of the foremost American Galleries.  Honored painter, fervent supporter of local artists and promoter of European art styles, Robinson’s contribution to the art world was multi dimensional.  He reached beyond provincial boundaries and brought a more universal awareness to the community. 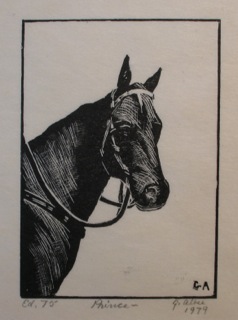 Grace Albee produced over two hundred prints in a fifty year career span as a wood engraver and became noted as a keen observer of the world around her, be it local scenery of Paris, Pennsylvania farm country, or the Rhode Island sea coast. Albee was first exposed to wood engraving as a child when looking though her grandfather’s old books. A precise and exacting personality such as Grace’s was inclined toward this painstaking and meticulous medium.

Despite her father’s disdain for the frivolous art world, the young woman attended Rhode island School of Design and there met her artist husband, Percy, sealing her art destiny. It was in 1928 that the Albees departed Providence and enthusiastically made their way to the artistic mecca of Paris. The young mother of five boys managed to take her first and only lesson in wood engraving with Paul Bornet. From this point onward, Grace immersed herself in the wood engraving medium and would pursue with no further instruction other than her own experimentation and self-tutelage. Further into her career Grace Albee became known for imagery not about humanity but rather, the effects of human habitation in the country and city and was accepted in the prestigious National Academy of Design. 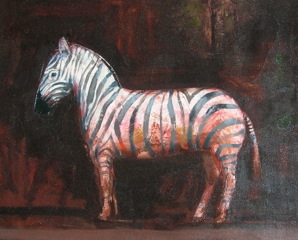 Now I know this is a zebra, and that might not count, but it’s such a great image I’m sharing it anyway.

Dean Richardson started his painting career in the 1950s, and he describes his forty year career as a struggle to find himself as a painter. However, his contemporaries saw his work in a different light. In the fiftys and sixtys he was a Fullbright Scholar, received a fellowship from the Guggenheim, and the Max Beckman Memorial Scholarship. He has had numerous prestigious shows including exhibits at the Whitney Museum, the Boston Institute of Contemporary Art, the Corcoran, and the Decordova Museum. His work has been widely collected and is included in a number of public collections including the permanent collection of the Whitney Museum.

He started his painting career as a pure landscape artist. As his work developed, he found his interest in America’s legends and mythology becoming the focus of his work. It was at this point that Richardson began to understand himself as an artist. The paintings now developed from within, placing fact and legend together to create a personal view of history and the world. His subject matter varies from scenes of famous Native Americans, to depictions of animals in their natural habitat, to the greatest American icon: baseball. He examines the heroes that have shaped American culture, as well as, their animal counterparts who have shaped the natural world. These two seemingly incongruous elements allow the viewer to explore the part of human nature which is at one time heroic and another vulnerable at the hands of nature. Richardson’s paintings force us to examine our past no matter how painful or triumphant it may have been, and look to the future with better understanding and tolerance towards man and nature.